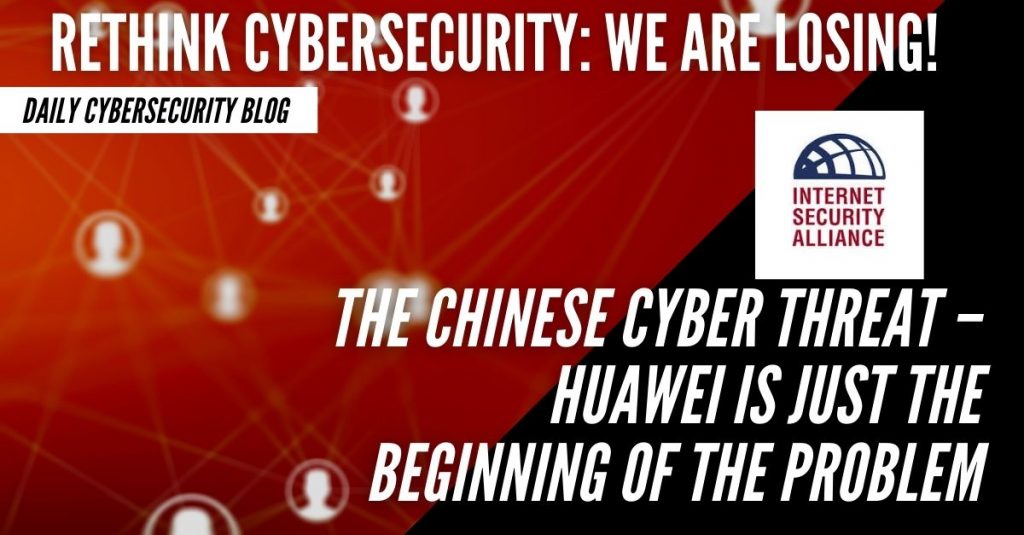 There has been substantial press in recent months about the risk Huawei poses including aggressive actions by the Trump Administration urging nations to “rip and replace” Huawei technology, While Huawei technology, complete with multiple back doors enabling spying on an unprecedented scale is a major threat, it is by no means the only technology threat China poses though its comprehensive digital policy (and TikTok – while problematic is not serious enough to even make the list of top five threats).

Early in the digital age the Chinese perceived that the vulnerabilities in the new digital systems could be used to gain access to western intellectual property that could help jump start their own domestic industries. They also understood the international market for advanced digital systems in developing, as well as developed countries desperate to reap the economic benefits of the digital age. By providing massive subsidies to their domestic companies China enabled them to approach nations on 5 continents and literally make counties “offers they couldn’t refuse.”

In addition, by embedding Chinese infrastructure in networks around the world, the Chinese government has created the ability to access information traveling across these networks for their own national interests whenever they desire.

This integrated model provides substantial advantages to these companies competing in the international free market for digital services. Chinese success in winning in these markets creates enormous leverage and strategic importance as they expand their foothold into the digital ecosystems around the world including western allies.

A recent study out of Carnegie Mellon University found that “Relatively little attention has been granted to the role of the Internet in the promulgation of Bridge and Road Initiative (BRI).  Often overlooked in the current discussion are the massive digital infrastructures (e.g. fiber-optic cables and data centers) that have been laid alongside transport and energy projects… Speaking at the first BRI forum in Beijing President Xi reiterated the critical role of the digital silk road in the overall initiative. He called for further integration into BRI of next generation network technologies – including artificial intelligence, nano- technology, quantum computing, big data cloud and smart cities – to enable innovation driven development.”

Even if the US government is successful in motivating governments to stop using Huawei in their core telecommunications networks – and as we will discuss later, that is unlikely, UK notwithstanding — the range of other Chinese technology giants each present their own, possibly larger, issues. Three such firms Baidu, Alibaba and Tencent (BAT) already have a combined value of over a trillion dollars and each, with China state support and allegiance, are making remarkable inroads into all manner of world commence and culture.

Alibaba is leading the world in FinTech disruption and already controls the world’s largest money market fund and handles more payments than Mastercard. It is operative in over 200 countries and is launching a $15 billion initiative in AI, quantum computing and emerging new tech driven markets.

Baidu was the first to apply deep learning and is extending into multiple markets such as brain inspired neural chips and intelligent robotics – all under China’s state-run umbrella.

According to analyst Peter Diamandis “When it comes to Chinese tech giants with absolutely no analog in the West Tencent takes the cake, hands down. Tencent combines the functionality of Facebook, iMessage, PayPal, UberEATS, Instagram, Expedia, Skype, WebMD, GroupMe and many others into a single ecosystem with its WeChat system. It is aggressively entering markets as varied as high end health care and mobile gaming (its League of Legends game is played by over a 100 million people every month).

China is aggressively using this vast and growing technology base to expand its reach to both influence and when needed spy on the rest of the world. Beijing’s 2019 Digital Economy Event announced cooperation agreements with 22 countries for DSR sectors and projects.  The list of new Chinese partners included Japan, New Zealand, Israel, Austria, Chile, Brazil, Indonesia and Kenya. Argentina signed a 28-million-dollar deal with ZTE to build a fiber optic cable system.  The China Export Import Bank signed an agreement with the International Telecommunications Union to address digital access and promote the Sustainable Development Agenda.

This technological proficiency, combined with the Chinese incumbent market status as a world-wide telecommunications provider, places the US in an extremely difficult position in the immediate and midterm with respect to competing in the new digitally dominated new world order.

Finally, by virtue of continued investment and international subsidized marketing the Chinese have become a world class competitor – in fact leader — in cutting edge digital technologies such as AI and 5G.

This technological proficiency, combined with the Chinese incumbent market status as a world-wide telecommunications provider, places the US in an extremely difficult position in the immediate and midterm with respect to competing in the new digitally dominated new world order.