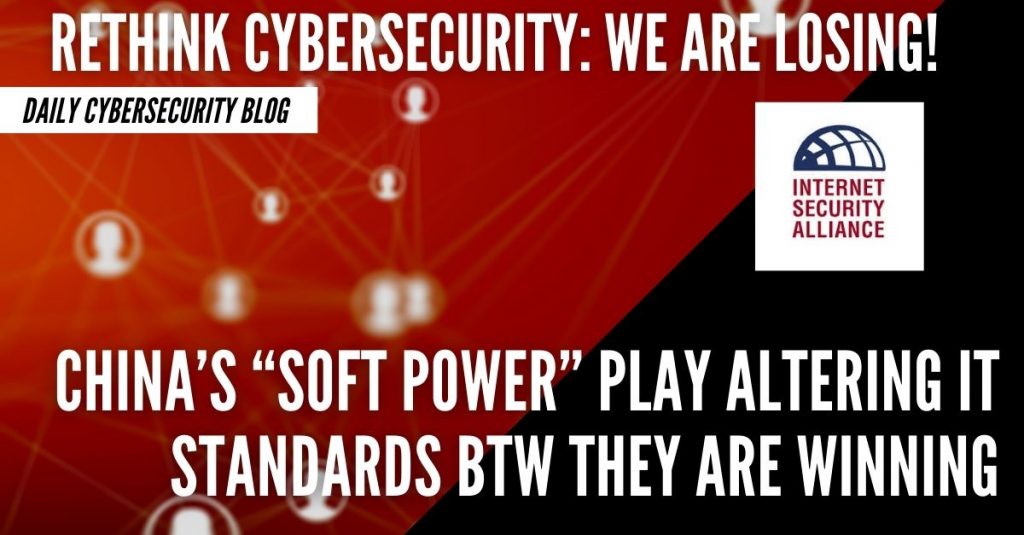 The greatest victory is that which requires no battle.
–Sun Tzu

In previous blogs we discussed how China used theft of western intellectual property to quickly make up ground in technology.  Fueled with this infusion of knowledge China has maximized its utility by providing massive support to its domestic industry enabling their companies to have competitive advantages.  In this fashion – a traditionally Chinese approach – they seek to supplant the western, US led, model not be invoking the workers of the world to unite, but by streamlining access to YOUTube and TikTok

China’s strategy to achieve national security, economic growth, and international influence is not by invoking the communist revolutionary zeal of old, but instead through a multifaceted effort to entice states to buy into a Sinocentric world order.

This global insurgency incorporates two sub strategies with the Belt and Road Initiative (BRI) functioning primarily as an economic and diplomatic tool fostering goodwill through massive infusions of investment to US allies and non-aligned states. This strategy is fully consistent with the traditions of Sun Tzu and Mao by appearing non-threatening while engaging the US asymmetrically and attacking its vulnerabilities. Although this is not a military conflict, it has deep implications for American security and for the future of an international system based on the rule of law and democratic norms.

A primary example of the synergistic nature of the Chinese digital strategy is Huawei.

“Tens of billions of dollars in financial assistance from the Chinese government helped fuel Huawei Technologies’ rise to the top of global telecommunications, a scale of support that in key measures dwarfed what its closest rivals got from their governments.  Huawei had access to as much as $75 billion in state support as it grew from a little-known vendor of phone switches to the world’s largest telecom equipment company. Besides the subsidies, since 1998 Huawei received an estimated $16 billion in loans, export credits and other forms of financing from Chinese banks for itself and its customers.”

A central element of the BRI is to offer needed infrastructure investment to cash strapped states throughout Asia, Europe and Latin American – and even to rural areas in the US. By virtue of its massive government support Huawei was in an excellent position to compete for contracts.  The WSJ analysis indicated that Huawei’s subsidies were 17 times larger than subsidies reported by Nokia of Finland, the world’s second largest telecom equipment maker while Sweden’s Ericsson, the third largest, posted none for that period.

As a result, Huawei was able to literally make nations around the world offers they couldn’t refuse. The potential economic development benefits from installing the high-quality Huawei equipment on extremely favorable terms made security issues an insufficient reason to pass on working with the Chinese supplier who often offered the telecom equipment as a package deal.

“In many cases… security and data privacy issues are considered less important than the need for telecommunications infrastructure and the difficulties of paying for more expensive Western equipment. Many countries continue to see Chinese technology investments as key to economic modernizations plans and China is excellent at linking its Belt and Road to national plans…Developing economies prioritize cost considerations over security risks related to Chinese equipment. Many African countries that rely heavily on Huawei and ZTE equipment appear to have similarly relaxed views on security concerns. In 2018 Western media reported that the African Union (AU) – for which Huawei had supplied telecommunications equipment — had its servers compromised which resulted in information leaking back to China for five years. Nonetheless the AU president joined Huawei in decrying the allegations of espionage and in 2018 signed a renewed agreement with Huawei.”

Acting in concert with the Chinese telecoms, Beijing has shown remarkable flexibility with respect to financing of these projects including easing debt burdens and complying with on-sourcing requirements. According to the Journal’s analysis Mega-lenders China Development Bank and the Export-Import Bank of China made available more than $30 billion in credit lines for Huawei’s customers.  World Bank official data indicate their banks were lending to the company’s clients in developing economies at 3% – around half of China’s 5-year benchmark rate since 2004.

These infrastructure investments are part of China’s broader strategic aim to replace the US as the global underwriter of economic development, thus decreasing the perceived necessity of participating in the US led international order. Aid and investment from established donors in the West tend to involve political and economic conditions that may make it unattractive. However, Chinese aid or investment has not historically been tied to demanding reform programs. This seemingly condition-less aid attracts states that are unable or unwilling to meet the demands of Western benefactors. By replacing the West as the incubator for growth, China alters global perspectives among developing states to favor it rather than the US and the West.