We need to Match our Adversaries -It’s Time for a US Digital Strategy? 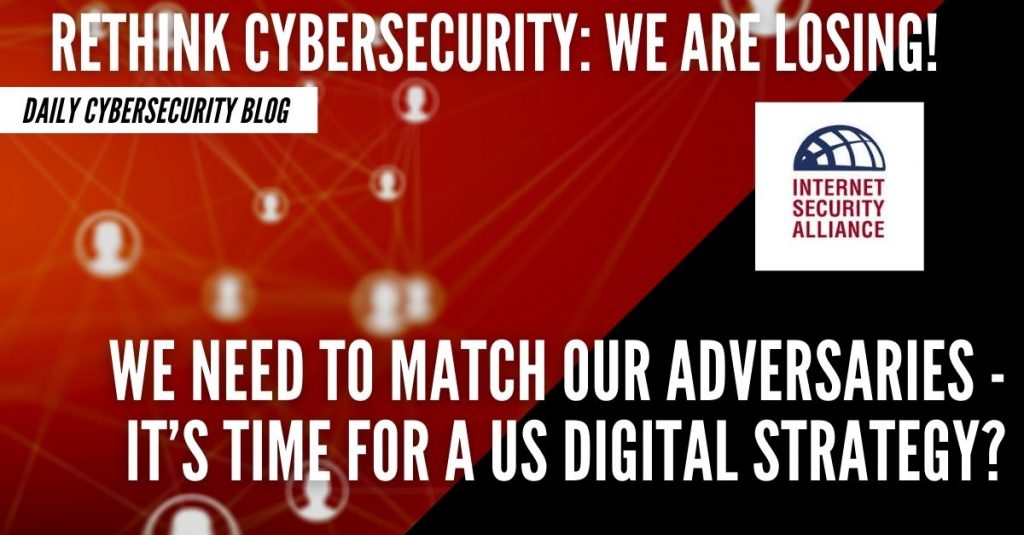 We recently discussed the fact that the Chinese government has developed and has been implementing a far more thoughtful and comprehensive digital strategy than has the US or the west. This strategy was not the product of some ad-hoc “Commission” or sub-cabinet coordinator.  China understood years ago that the digital age was coming, and it needed a thoughtful approach to how it could use the rising tide of digitalization to achieve its broad geo-political goals.  President Xi has personally been involved in its conceptualization and implementation

Although the Chinese often speak of cybersecurity – a term with very different meaning to the Chinese government than the US usage – it’s important to understand they were not thinking narrowly.  The Chinese were interested in developing a digital strategy – not just a cybersecurity strategy.

The digital strategy being implemented has been developed over several years and is designed to be both pervasive and structural.  This strategy is designed to have impact beyond the immediacies of current issues or politics.

The first Chinese Communist Party document to explicitly use the term “industrial policy” was the seventh Five-Year Plan (1986–90). By the 16th National Congress in 2002 the Party put forward the notion of pursuing “a new path of industrialization”, with emphasis on the development of science and technology capabilities, environmentally friendly and resources-saving technology, and information engineering and related industries. The culmination of these emphases was in the speech by President Hu Jintao in 2006, entitled “Medium- to Long-Term Plan for the Development of Science and Technology”. Since President Xi came to power, a large scale of government-led technology initiatives, including “Internet Plus”, “One Belt One Road – Digital Silk Road” (DSR), and “21st Century Cyberpower” have been launched. The central government of China has repetitively stressed the importance of cross-sector information, and digitization of the economy as part of the national strategy.

In many ways what China has done on a nation state level is quite similar to what leading private companies have been doing for much of the past couple of decades – digital transformation. For years leading private companies have been taking a step back and working through how they needed to adapt their business plans to the new digital age.  This is essentially what the Chinese government has done.

China’s state capitalism strategy is, perhaps ironically, consistent with several fundamental elements of western economics although its roots lie in traditional Chinese philosophy.  It is in fact a modernized integration of elements of both eastern and western culture.

Moreover, this integrated approach has been – and continues to be – quite successful

Concurrently China has adopted the Belt and Road Initiative (BRI) as a core component of its foreign policy.  This has led to a growing and complex alliance between the state and its homegrown Internet companies in building the “Digital Silk Road.” (DSR) One of the major objectives of these initiatives have been facilitating corporate China’s global expansion. An important goal of this initiative is to connect China to major Eurasian and African nations through infrastructure building trade and investment. It is estimated that a fully implemented BRI investments will total more than $1 trillion and affect more than 60 countries.

BRI and DSR weren’t started out of thin air. In fact, China has consciously and intelligently integrated economics with unique characteristics of the digital age to enhance its strategic position both internationally and domestically. There may be a lesson there.

In comparison the US Government has not wisely integrated its economic and technical assets as well as China has and by many objective measures the US has been uncompetitive in the geo-political digital space. In addition to the weakening of many of our traditional international relationships due to China’s advancements, our immensely valuable digital assets have been routinely stolen (including our highly valued military weaponry). While violent crime is down, cyber-crime continues to go through the roof, even our elections and our national sense of culture are under attack — all through cyber means.   We in the US might also benefit by broadening our conceptualization of what we are dealing with.