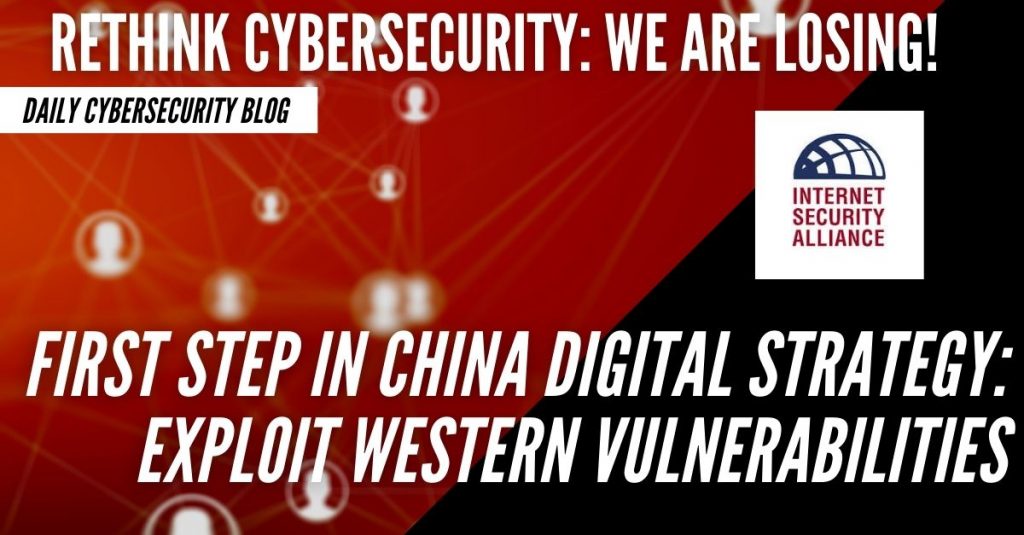 If the enemy leaves a door open, you must rush in.

Early in the digital age the Chinese understood that the Internet was not built with security in mind and with the digital doors to western intellectual property wide open the Chinese did indeed rush right in.

It’s helpful to understand where the Chinese government was coming from. Prior to the “opening” of China, just over 40 years ago, (right around when the “internet was being created) China’s economy can be fairly described as centrally controlled, isolated, stagnant, inefficient, and extremely poor. Since then China has had one of the world’s fastest growing economies. On average, since the 1979 “opening” China has had a real average Gross Domestic Product (GDP) growth of 9.5% through 2018. The World Bank has called China’s growth “the fastest sustained expansion by a major economy in history.” Among the significant impacts of this economic expansion has been that China has raised an estimated 800 million people out of poverty during this time.

The turn toward a conscious industrial policy, which led to the coordinated use of economic levers and digital technology to achieve strategic national security goals, started in the mid-1980s. Realizing that they were well behind the western nations, especially the US, China had to find a way to quickly make up ground.  Absent the time for painstaking R&D – and frankly possessing a very different value on “personal property” intellectual property theft was a logical first step.

China cleverly accessed the vulnerabilities in the networks the west was using to fuel its own growth to help jump start their own economy. In short, Chinese IP theft and cyber espionage became a large part of China’s industrial strategy.

Jim Lewis at the Center for Strategic and Internet Studies has noted that:

“Illicit acquisition of foreign technology has long been promoted by the Chinese government. Since the early 1980’s China has engaged in an energetic espionage campaign and moved into cyberspace two decades ago. The Chinese discovered that the Internet gave them unparalleled access to poorly secured Western networks.  Cyber espionage is accompanied by human collection efforts … but the most rewarding collection of programs have shifted from human agents to cyber espionage.”

By 2016 the US Trade Representative (USTR) Report stated that:

“Actors affiliated with the Chinese government have infiltrated computer systems in the US and stolen terabytes of data including firm’s intellectual property for the purposes of providing commercial advantage to Chinese firms.”

The impacts of this strategy have been difficult to fully and precisely measure, but they are widely understood to be massive. The USTR estimates that the theft of trade secrets alone has a cost between $180 and $540 billion annually. And the former head of the NSA, General Keith Alexander, told Congress that the cyber intellectual property theft constituted the largest transfer of wealth in human history.

The value China received though their internet attacks was also not limited to their direct financial gains. China took the IP it gained by exploiting digital vulnerabilities and turbo-charged it with massive economic support for its domestic industry which in turn provided tremendous advantages to Chinese companies in the international marketplace. As Jim Lewis from CSIS has noted:

“Stolen IP does not guarantee success for the acquirer, but in China this new competitor may have access to government subsidies or may benefit from a protected domestic market built with non-tariff barriers to hobble competition.  Subsidized Chinese companies have an immense advantage operating from a closed domestic market and selling into an open international market.  If nothing else this distorts the global market by creating overcapacity and putting unsubsidized foreign firms at a disadvantage.”

economic strategy. The role of the internet, both as a source for knowledge, stolen or leveraged, and as a basis for additional strategic value should not be underestimated.

Simply stealing western IP was by no means sufficient for China. Tomorrow we will begin to detail the massive government support China provided its domestic industry to assist them in achieving not only technological equivalence but even superiority in advanced technology which has been further leveraged for significant geopolitical influence much to the disadvantage of the US and the west.