Chinese Tech: Spying Around the World They Just Can’t Say No 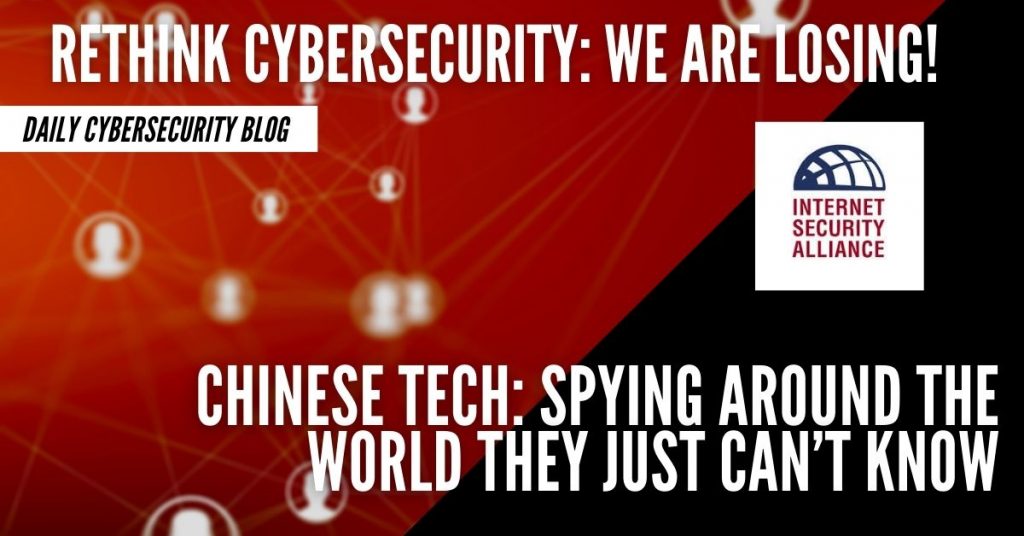 In earlier posts we documented that China through their comprehensive digital policies – largely articulated in their Belt and Road and Digital Silk road initiatives — has launched a comprehensive program to embed their technologies around the world.  We have also indicated that this program has already succeeded throughout much of the world placing the west in general, and the USA in particular at a substantial geo-political disadvantage.

That’s not the bad news.

Simply losing contracts to an adversary and having that adversary in position to further leverage their new friendships for geo-political advantage would, in itself be cause for worry.  Even more worrying is that these massive infrastructures are likely riddled with access points for the Chinese government to listen in on potentially sensitive communications – and the companies that run the networks are obligated under Chinese law to assist the Chinese government in these activities.

“The Chinese system of military-civilian fusion (CMF) presents an additional layer of problems. Military-civil fusion is a national level Chinese effort led by Xi Jinping himself that seeks to systematically take down barriers between China’s civilian and military sectors….firms such as Huawei, Tencent,  ZTE, Alibaba and Baidu have no meaningful ability to tell the Chinese Communist Party “no” if officials decide to ask for assistance – e.g. in the form of access to foreign technologies, access to foreign networks, useful information about the foreign commercial counterparties, insights into patterns of foreign commerce or specific information about activities or locations of users of Chinese hosted or facilitated social media computer or smartphone applications or telecommunications.”

For the Chinese government simply building the world’s largest telecommunication equipment company is just a tactic in a broad national strategy.  In its 2013 assessment of China’s three wars strategy, the US Department of Defense identified China’s goals as regaining global status as the premier power by weakening US alliances and defeating the US through non-kinetic deceptive warfare.

These Chinese-based commercial digital companies generally follow the paradigm detailed in the Huawei example.  Asst. Secretary Ford noted that “The Global Chinese firms do not always make decisions for commercial and economic reasons…. All such firms are subject to a deep and pervasive system of Chinese Communist Party control which uses them as instruments not only for making money but also for pursuing the Party-State’s agenda… Such firms are subsidized by the government with massive lines of credit and long-duration loans with generous grace periods from state owned banks in order to undercut competition and penetrate foreign markets more deeply.”

Moreover, as is the case with Huawei, there are a wide range of Chinese laws that require these companies to cooperate “unconditionally” with the Chinese Communist Party’s security apparatus.  For example, the National Intelligence Law requires entities in China to cooperate with its intelligence services and covers both privately owned and state-owned enterprises.  Analogous provisions are also included in China’s National Security Law. Counter Terrorism Law and Cybersecurity Law.

This integrated model provides substantial advantages to these companies competing in the international free market for digital services. Chinese success in winning in these markets create enormous leverage and strategic importance as they expand their foothold into the digital ecosystems around the world including western allies.  On top of the economic leverage the Chinese strategy has created, the firms are literally required by law to essentially function as intelligence assets for the Chinese government.

In May the United States Government finally pulled the plug on Huawei activities in the US and placed the company on the Department of Commerce’s “Entity List” which imposes restrictions on US commercial engagement. Commence placed Huawei on this list after it was indicted by the US Justice Department for theft of trade secrets, attempted theft of trade secrets, conspiracy wire frauds and obstruction of justice as well as bank fraud, and conspiracy to commit bank fraud, conspiracy to commit money laundering and violations of the international Emergency Powers Act in illegally assisting Iran with sanctions evasion.

Even if the US government is successful in motivating governments to stop using Huawei in their core telecommunications networks the range of other Chinese technology giants each present their own, possibly larger, issues.  Three such firms Baidu, Alibaba and Tencent (BAT) already have a combined value of over a trillion dollars and each, with China state support and allegiance, are making remarkable inroads into all manner of world commence and culture.

China is aggressively using this vast and growing technology base to expand its reach to both influence and when needed spy on the rest of the world. Beijing’s 2019 Digital Economy Event announced cooperation agreements with 22 countries for DSR sectors and projects.  The list of new Chinese partners included Japan, New Zealand, Israel, Austria, Chile, Brazil, Indonesia and Kenya. Argentina signed a 28-million-dollar deal with ZTE to build a fiber optic cable system.  The China Export Import Bank signed an agreement with the International Telecommunications Union to address digital access and promote their sustainable Development Agenda.