Senate Report: US is Losing the Digital World to China 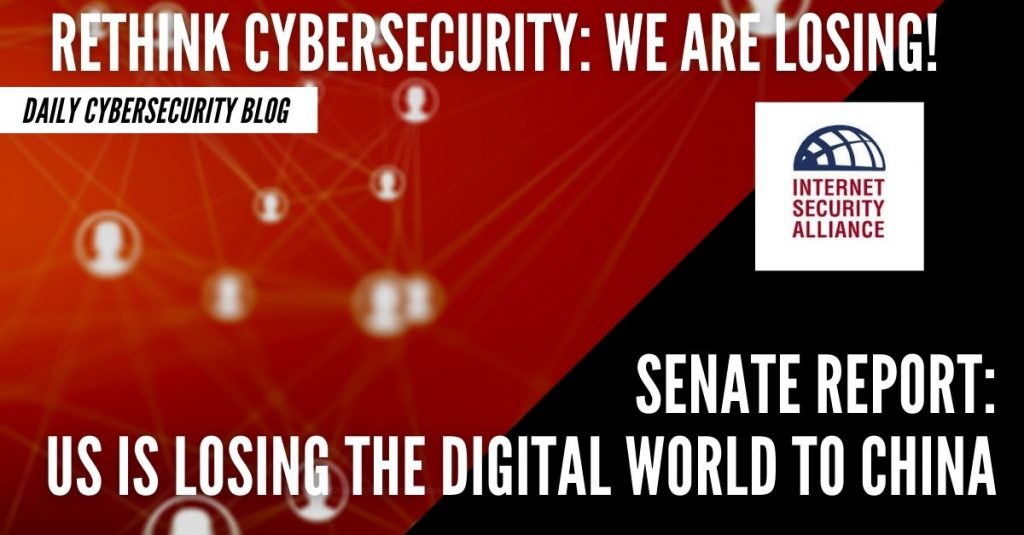 In previous posts we have documented that China has used their comprehensive. Integrated – and exceedingly well endowed – cyber strategy BRI and DSR initiatives) to steal intellectual property, compete unfairly in international markets and create a strategic advantage in digital technology on 5 continents (including until recently our own).

The implications of China’s success implementing this strategy could be dire. A report issued by the Ranking Member of the Senate Foreign Policy Committee, Robert Menendez (D-NJ) in July concluded “The United States is now on the precipice of losing the future of the cyber domain to China. If China continues to perfect the tools for digital authoritarianism and is able to effectively implement them both domestically and abroad then China, not the United States and its allies will shape the digital environment.”

While as a whole the BRI projects are primarily designed for economic and diplomatic benefits, certain projects have particularly significant geo-strategic implications. The Port of Gwadar is an example. The Port will connect the Persian Gulf to China through the China-Pakistan Economic Corridor currently being built, which will allow energy supplies to reach China without passing through the strategic choke point at the Strait of Malacca. In addition, the Port of Gwadar is deep enough to accommodate Chinese submarines and aircraft carriers, which provides further utility as a base from which China could balance and contain US Naval activity in Asia. Similar investment in the Maldives and elsewhere may likewise allow the People’s Liberation Army Navy to operate further from China and exclude the US Navy from Asia. While BRI projects are designed to build goodwill toward China and develop Chinese and partner states’ economies, there exists an undercurrent of utility provided to the Chinese military.

In Latin America, alignment with the US can be accessed via shared voting patterns in the UN General Assembly. A recent study has begun to show alignment with US- Latin American voting patterns to be negatively correlated with increasing Chinese trade and investment. In 2016 Greece, a large recipient of Chinese investment, sold a controlling share of Piraeus Port to COSCO (a Chinese state-owned enterprise).

Like Latin American states, Greek voting patterns have changed. In 2017, Greece was the sole vote blocking an EU statement at the UN to criticize Chinese human rights violations. The degree to which these actions can be considered voluntary is debatable considering the position of power that China occupies compared to the states in which it invests. While it may be easy (if unwise) to shrug off China’s ability to seduce a smaller, poorer nation-state, the combination of economics and technical enhancement has proven enticing even for nuclear power-level nations.  The WSJ provides a telling example in Pakistan in 2009. According to the report Huawei pitched a surveillance system to Pakistan that was approved by the Prime Minister, however the country’s procurement rules required competitive bidding. In order to side-step that issue the Chinese Export Import Bank offered to lend Pakistan the $124.7 million price and waive the 3% interest fee on the 20-year loan.  The only condition was that Huawei would get the contract.  The competitive bidding process was circumvented, and Huawei installed the Pakistani Prime Minister’s surveillance system. At the inauguration ceremony Pakistan’s interior minister told the assembled proudly that “The Chinese government funded it and Huawei built it.”